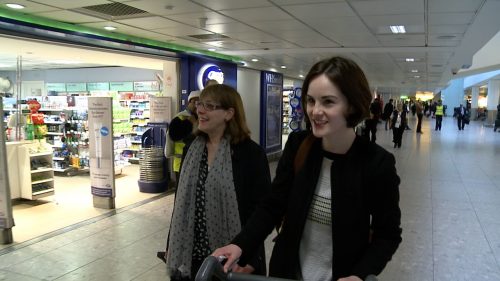 It was a long way from Downton Abbey as actresses Michelle Dockery and Phyllis Logan arrived at Heathrow in 2013 from a Los Angeles award ceremony. Carrying their own bags and ignored by other passengers, the two actresses, who played Lady Mary and Mrs Hughes, casually waited in the Terminal 3 arrivals area for their driver.

At the time, Downton Abbey was one of the most popular programmes on television, and garnered a string of accolades particularly in the United States where its old-world aristocratic charm appealed to American viewers. It ran to six series between 2010 and 2015 and was followed by a feature-length film in 2019.

Nelson Mandela on tarmac at Heathrow – 1998