HomeAirlinesThe Brits are back - British Airways and Virgin Atlantic lead the...
AirlinesCovidDefault 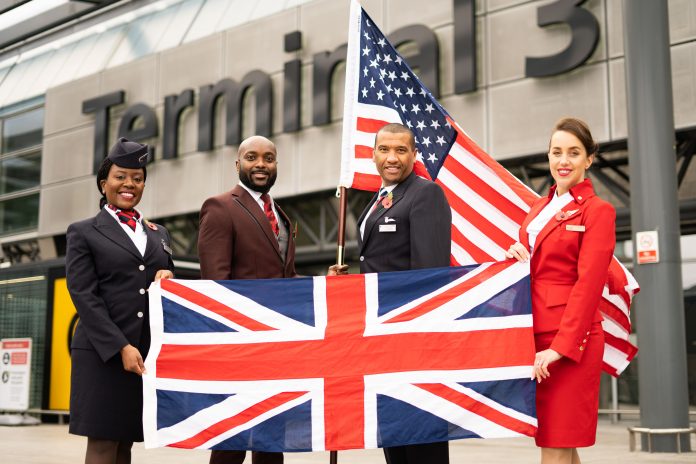 Flights between the UK and the USA began today after the borders re-opened Stateside, allowing vaccinated passengers to travel once again across the Atlantic.

British Airways and Virgin Atlantic performed a co-ordinated simultaneous take-off from both of Heathrow’s runways today, signalling the end of a near two year hiatus in leisure travel between the two countries due to the COVID-19 pandemic.

BA001 – the flight number that was once the preserve of Concorde – and VS3 both lifted off at 0850 this morning (8 November) en-route to New York’s John F Kennedy airport. Both airlines had agreed to come together for a unique collaboration to celebrate the resumption of transatlantic travel for the two UK carriers.

The British Airways A350 flight was directly powered by a 35% blend of sustainable aviation fuel (SAF) provided by BP and made from used cooking oil. It is believed to be the first commercial transatlantic flight ever to be operated with such a significant level of the fuel blended with traditional jet fuel.

BA’s Chief Executive Sean Doyle, travelling on the BA001, said: “Today is about celebrating the UK-US reopening of the transatlantic corridor after more than 600 days of separation, and it was fantastic to be able to mark this by synchronising the take-off of British Airways and Virgin Atlantic flights for the first time ever.

“While flying is vital to connect the world and support the UK’s economic recovery from the pandemic, it’s important for us to use this moment to demonstrate how we’re driving our decarbonisation plans forward, and what the future will look like for aviation. That’s why we’ve directly powered our first flight to the US today with sustainable aviation fuel and offset emissions on behalf of our customers. We’re looking forward to the Government’s continued support to ensure the development and mass production of sustainable aviation fuel continues at pace.”